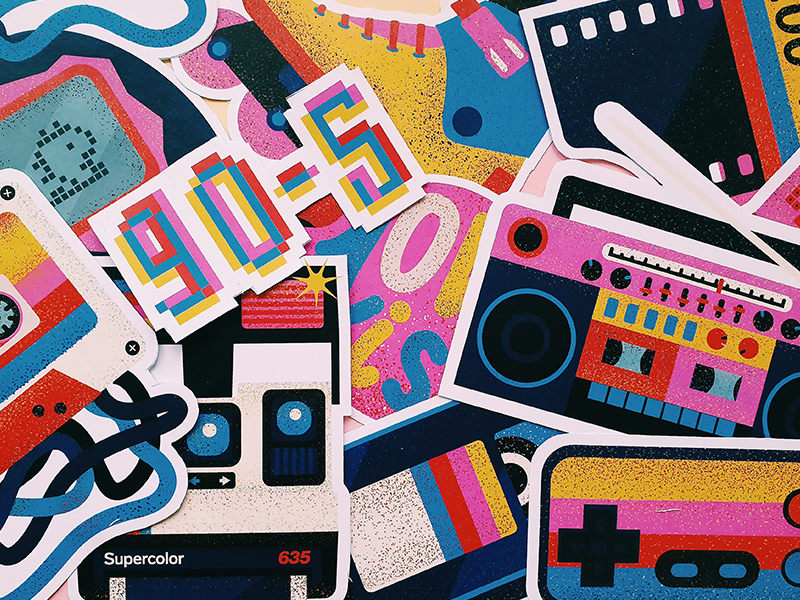 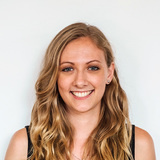 Millennials rejoice! This one is for you. Are you ready to bring back the loud colors, dive deep into pop culture, wear everything tie-dye, and venture into the raver’s paradise?

Mainstream media certainly set the stage for everyone who grew up in the 90s to really be an “individual” and develop a sense of style. We still don’t know whether this was a good or bad thing… But one thing is for sure, we won’t ask you to use Comic Sans MS ever again.

Don’t forget to read up on 70s and 80s design trends before you get started!

The design trends of the 1990s can sometimes be challenging to put a finger on. While previous decades had well-defined trends associated with each period, the 90s focused more on individualism than any decade before it.

Influenced by fashion, music, videos, and magazines of this decade, along with the globalization of the internet, it’s no wonder there was such a wide range of design styles prevalent during this time.

The way you remember the 90s is probably very different from how your peers remember it. This could be explained by your age when you lived through the decade but more likely attributed to the wide range of styles available.

Early in the ’90s, there were a lot of echoes from the ’80s, including amplifications of New Wave and Memphis-style patterns, bright and pastel neon colors, and geometry. But this is not what defines the 90s decade of design.

Here are the top three graphic design trends of the 1990s.

The start of the decade experienced a carryover of design styles from the 80s; this is really where the similarities ended. In the time of Kurt Cobain, Stone Temple Pilots, The Spice Girls, and Oasis, the ultimate goal of the 90s was to be cool. This was reflected in the designs and styles of some of the “coolest” bands of the time.

Rock, indie, British pop, grunge, and electronic rave music ruled the decade, influencing a “carefree” design style throughout. This decade also faced some polarization in the design styles influenced by music. Neon and psychedelic smileys lived on the club culture side of things. These were opposed by the carefree grunge mood and fun-loving style of Britpop.

Simply put, there are plenty of elements to choose from when it comes to the music-influenced design of the 90s.

If the 90s were to be remembered for any singular design trend, it would have to be the typography.

From the infamous creation of Comic Sans (1994) to the creation of Microsoft WordArt, novelty typography played a considerable role in the decade’s design trends. With vector software readily available to designers of all levels, and most designs from this decade immortalized on the internet, there are plenty of examples to draw inspiration from.

Check out iconic logos for Clueless, Jurassic Park, and the Friends and Rugrats TV series as prime examples.

The latter years of the decade brought the beginning of the global movement of minimalism. Influenced by leaders in the fashion industry, namely Calvin Klein, designs of the late 90s were filled with clean lines and neutral color palettes emphasizing elegance.

From furniture to fashion, minimalism has been the most resilient design style to emerge in the 1990s.

The Anti-Design movement cannot be left out of a discussion on 90s design styles.

The widespread availability of the internet meant that anyone could be a designer (and the same is true today)! But with what limited software and tools were available at the time, the result was as you’d expect: an aesthetic mess.

Due to today’s information-heavy landscape of content creation, the anti-design style has made a comeback. With many creators prioritizing content over design or simply not having classically trained design skills enabled by tools like Canva, anti-design is on the rise again.

For millennials, the 1990s was the decade of design.

From the legacy of 80s geometric patterns and maximalism to the global minimalist movement, and peppered with musical influences and novelty fonts, the 90s sure had a lot going on.

But the cool thing about this decade is that designers today can select which 90s design theme they want to emulate, and almost everyone will be able to identify it as an influence of the 1990s.

This is the time to whip out your tie-dye, put on your bike shorts, and create those 90s-style pieces. ■

About the Author: Olivia Hoskin is a freelance writer with a background in tech and marketing. A true design fan at heart, you’ll find her writing about the latest industry trends, technologies, and the inspiring endeavors of fellow creators. She’s a champion of remote work, a lover of responsible technology, and a fitness geek and enjoyer of the outdoors in her spare time. Find her at oliviahoskin.com.