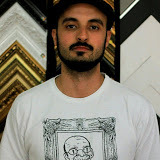 Tchago worked as a designer and art director at digital agencies and today he is a partner in a framing business with his father (Cido Molduras).

Since childhood he has been in the habit of making collages, and together with his family environment, studies and experiments, his works express more and more what he thinks.

He has been developing manual collages in a more professional way for over twelve years, has participated in individual and collective exhibitions with other artists, regularly does collaborative work and develops curatorial projects.

His works go through a process of selecting the images and the compositions are each formed with a weight.

The works are generally guided by social criticism and human reflection as a theme, trying to be explained (or not) by their titles, as in films or comics.

Currently he is part of the international collective 'Gli Informali' of manual collages in the world.