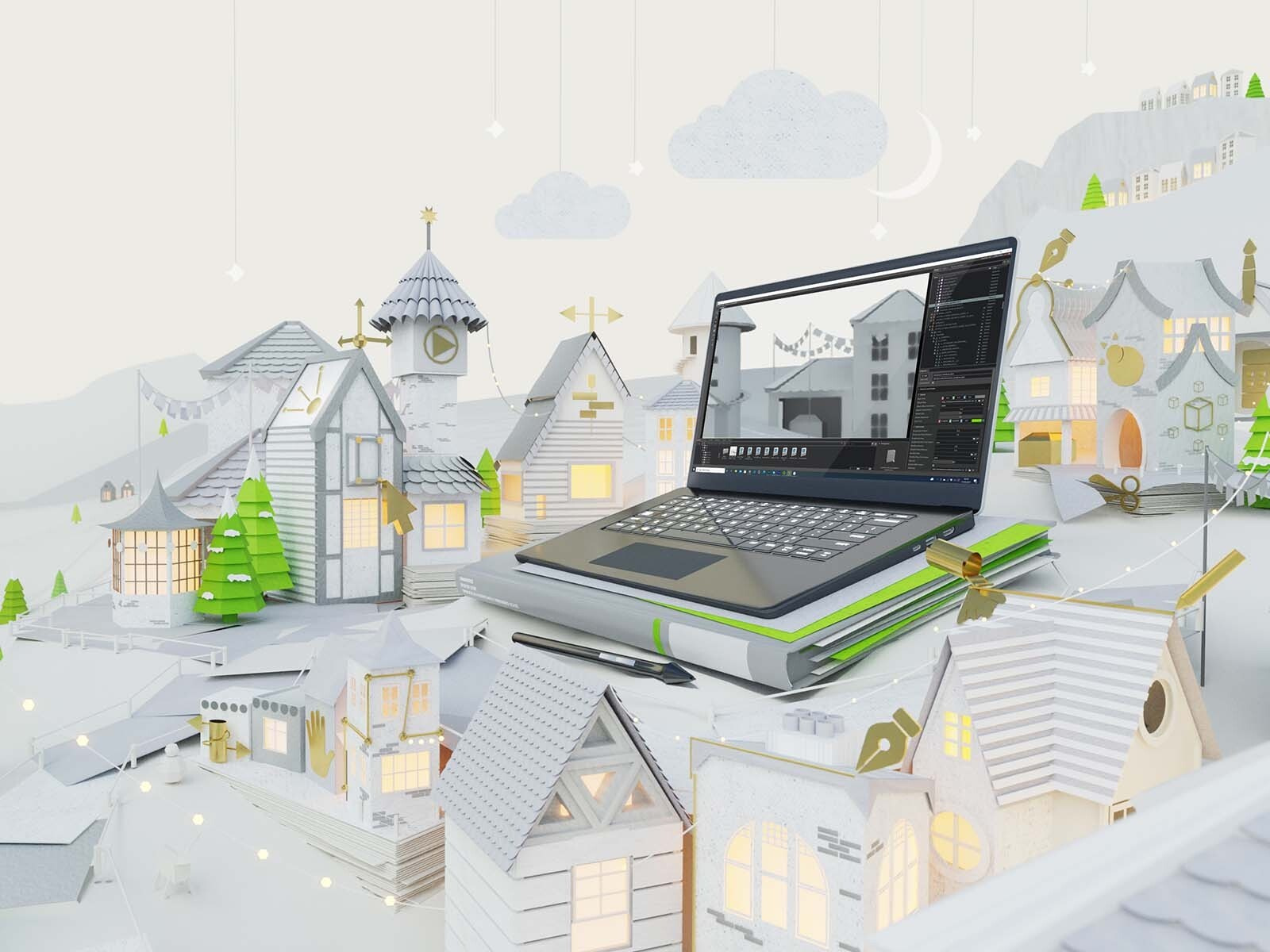 For even for the most tech-savvy artists, choosing your next computer—your next digital canvas—can be a bit nerve-wracking, and rightly so. It’s a big decision!

Time is money, so whether you’re an inspiring YouTube creator who owes an assignment for university, or a freelance designer rushing to meet a critical deadline, hardware can be the difference between merely getting things done or meeting your creative ambition.

In this article, we’ll explain all of the decisions you’ll have to make when buying a laptop for content creation so you can get the best one for your needs and budget.

✏️ Thanks to our friends at NVIDIA for sponsoring this blog post!

What GPU should I get?

The graphics card (GPU) is the critical component that breaks up complex information and problems into thousands or millions of separate tasks, then solves those smaller problems rapidly and more efficiently. All computer components matter (more on display, CPU, RAM shortly) but it’s the GPU that drives performance and is easily the most important part.

Modern creative apps are GPU-accelerated, so if you have a discrete graphics card—separate from the CPU and dedicated to visuals—tasks requiring significant computational power will be much faster.

To help decide on a GPU, let’s review the different creative types of work, which creative apps are sped up by an NVIDIA RTX GPU, review some of the more popular features, and decide which range of GPUs make the most sense.

Capturing images is only the beginning. Luckily photographers can touch up photos far easier.

Designers specializing in Adobe Illustrator can interact and zoom in and out of complex vector graphics smoothly and effortlessly with RTX GPU-acceleration.

Premiere Pro editors get a special bonus by way of a hardware encoder in RTX GPUs exporting up to 5x faster. The RTX GPU-accelerated AI Auto Reframe feature crops landscapes to export files in various formats without having to edit manually and Scene Edit Detection easily identifies cuts in video, all adding up to massive time savings.

Power users in Blackmagic Resolve can use Auto color, Shot match, and RTX GPU-accelerated color grading to get to the perfect color on final files.

It’s no surprise 3D has the most accelerated apps, considering the heavy rendering and editing workload. 3D artists have the most to gain with NVIDIA RTX GPUs.

Blender artists can take advantage of dedicated ray-tracing hardware on RTX GPUs to dramatically increase rendering speeds and RTX GPU-accelerated AI Denoising in the viewport cleans up noise on the fly providing a cleaner palette to work from.

All Adobe Substance 3D apps including Stager, Sampler, Designer and Painter are RTX GPU-accelerated ensuring the best performance across the entire workflow.

Other specs to consider

Artists have to consider resolution, color calibration, and panel type when selecting a display.

Most laptops start at 1080p, scaling up to 1080p, 1440p, and 4K. Specific creative workflows require the absolute maximum resolution and pixel density such as photography, but any of these will work fine, it’s a matter of personal preference.

Accurate color calibration and brightness are important, DCI P3 color gamut and Adobe RGB coverage provide needed contrast, the former recommended for video artists and the latter for graphic design and photography. PANTONE certification is becoming increasingly mainstream and recognized as a top choice in the creative community.

OLED displays produce the most vivid colors and the purest blacks, 25% more colorful than LCD displays. OLED cut out 40 percent of blue light generated by LCD screens, a strain for creators who spend a lot of time on their laptops.

Raw processing power and cores are needed to run the OS and ensure smooth interaction between vital machine components, removing possible bottlenecks and allowing the GPU’s impressive performance to shine.

There are many CPU options available, Color My Tech has a detailed breakdown of CPUs for laptops in content creation. Remember the GPU is more important, but a CPU cannot be upgraded.

Verdict: An Intel i5 10th Gen or AMD r5 5th Gen or above can handle all but the most demanding workflows. Money spent on an upgraded CPU could be routed to the display or more RAM.

Memory is a crucial element in digital creative work. More RAM enables artists to work with larger video, photo, or 3D files, increases workflow speeds, and delivers a much smoother experience when working in multiple applications at once.

Verdict: 16 GB is a minimum for working in and out of medium sized files, freelancers and professionals should consider 32 GB or more.

NVIDIA’s collection of laptops are specifically designed for content creation, powered by NVIDIA RTX GPUs, meeting the above specs requirements, and are purpose-built with vivid color displays and blazing-fast memory and storage to boost creative workflows: NVIDIA Studio laptops.

For a limited time this holiday, get three months of Adobe Creative Cloud ($238.47 value) when you buy a select NVIDIA Studio laptop — good for new and existing Adobe customers.

NVIDIA Studio is also sharing the love by way of featurette videos, created by some of the most popular content creators, discussing their journeys into content creation and sharing tips on how to get started. These one-of-a-kind insights into each creative field will include giveaways, the same model Studio laptop they use! ■