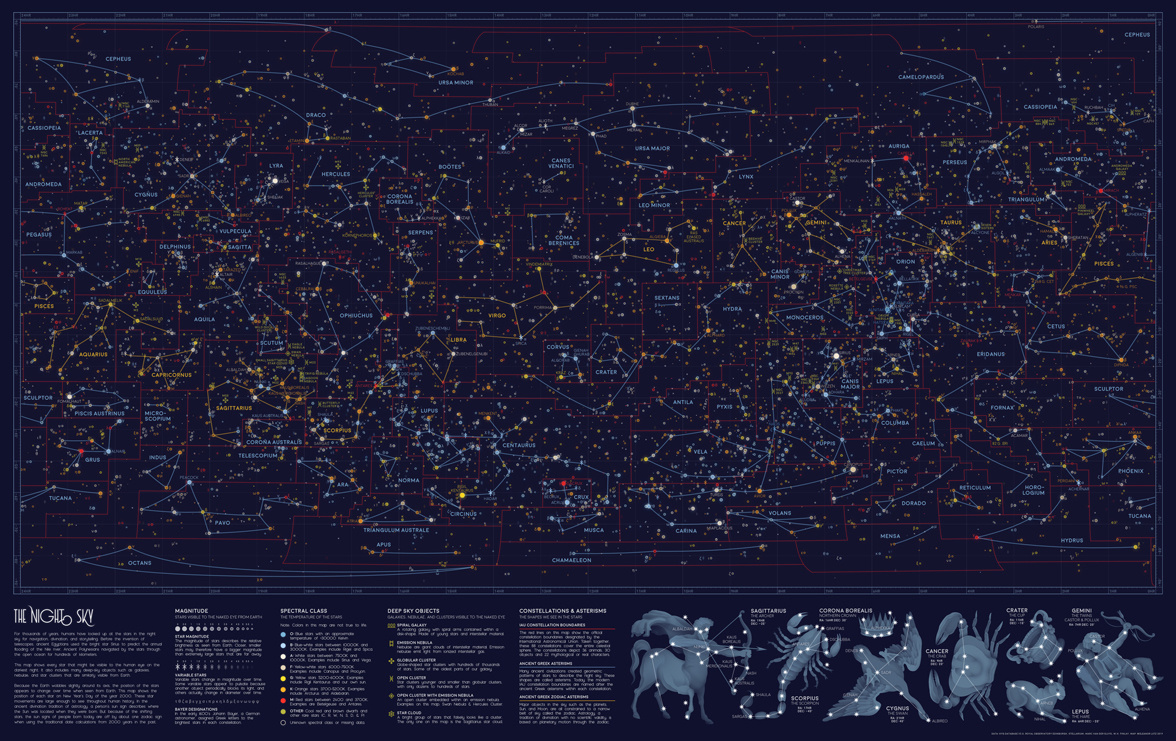 As a science designer, Eleanor Lutz is a pro when it comes to infographics, maps, and data visualization projects. Learn more about how Eleanor fuses two very different passions as she shares insights on her latest data-heavy design project—An Atlas of Space. 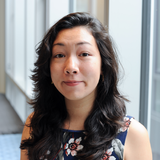 Eleanor Lutz Hi there! I'm a biology PhD student and occasional designer. I make a lot of infographics and science GIFs.

Tell us about yourself.

I’m a science designer and PhD student living in Seattle, Washington. I’ve always been really interested in biology and neuroscience, and in my PhD program, I research how mosquito larvae navigate through their environment. Recently I spent a lot of time learning Python as part of my research, so I wanted to use programming as part of my design work as well.

I’ve always liked drawing and working on crafts, so I’m not sure if I can pinpoint exactly when I decided to start practicing design. I first started making science infographics right after finishing my undergraduate degree in molecular biology. I was working as a freelance designer at the time, but I was still really excited about research. In the beginning, I didn’t have many scientists or researchers as clients, so I tried to make biology infographics in my free time. 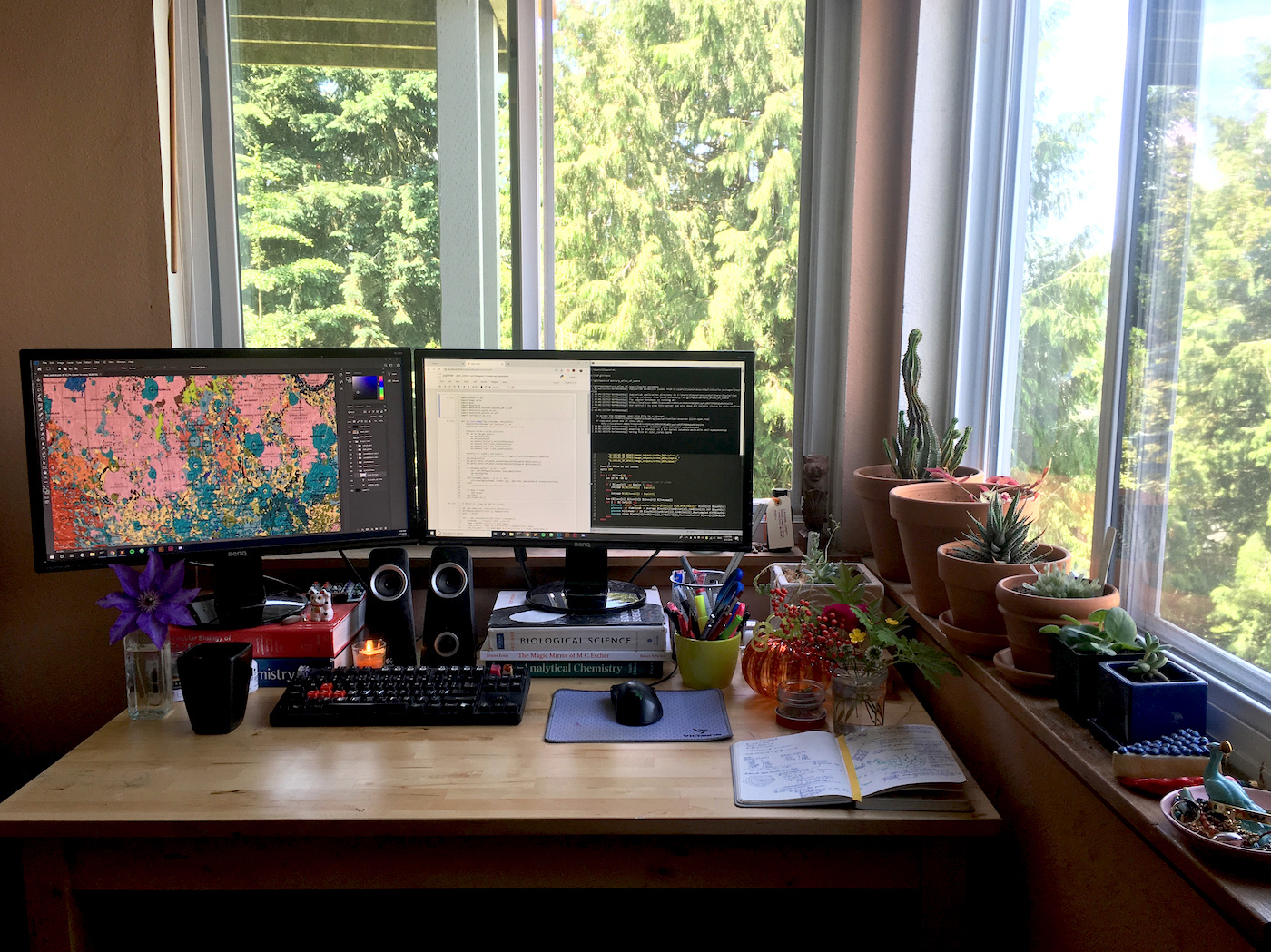 My newest project is a collection of ten maps of outer space. To name a few, I’ve mapped the seasons of Earth over time, the geology of Mars, and everything in the solar system bigger than 10km.

One of the things I’m really excited about with this project is that all of the code will be open-sourced! I’ve been meaning to make a set of design tutorials  for a while, and this project was the perfect opportunity because all of the data I used is open to the public.

Take us through your mapping and design process for the project.

I wanted to make all ten maps cohesive, so I spent a lot of time at the beginning of the project working on things that would span across the entire project: color schemes, font choices, and decorative elements like borders and backgrounds.

The design process was really a compromise between the artwork and the available data.

The actual mapping process was a little bit different for each map because I used many different types of datasets. I initially wanted to map all of the planets in the solar system and the stars, but after looking more into the available data I realized it would be pretty difficult to map the gas giants. So the design process was really a compromise between the artwork and the available data. 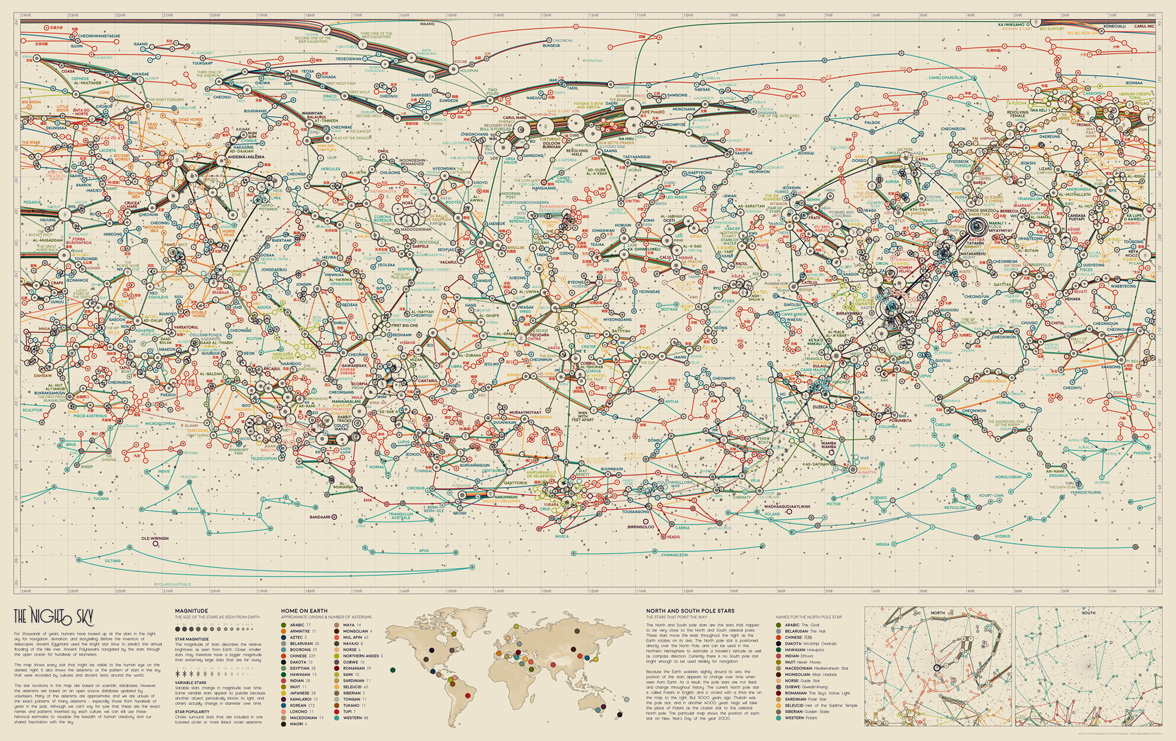 Constellations from around the world.

What have you found are some best practices for visualizing large sets of data?

I think it’s always good to build-in sanity checks when working with large datasets. For example, when I was working on my asteroid orbit map, I picked a couple of easily recognizable objects and double checked that they were in the right place after each iteration. This was especially helpful for this map because I didn’t have an intuitive idea of what orbit data should look like when plotted using a log scale.

Sometimes it can also be helpful to tinker with small subsets of data in the beginning. But visualizing large datasets usually looks very different from small amounts of the same data, so I try to only use “test sets” to understand the data—not to visualize it.

What’s next for you?

Right now I’m trying to finish up my PhD so I’ll probably be fairly busy with that for the next year! I’m hoping to still fit a couple of new designs in there as well, but I haven’t decided yet what those will be.

Keep an eye out on Dribbble in the coming weeks as I’ll be sharing each map alongside open-source code and tutorials, so you can take a stab at recreating the designs yourself!

Want to keep up with Eleanor? Find her on Dribbble and at Tabletopwhale.com.