Meet Gregory Darroll, a freelance illustrator and designer currently based in Durban, South Africa. Gregory typically works with ad agencies, brands and private clients both locally and abroad. His illustration style is filled with personality, color, and detail and his work is often inspired by the nostalgia of things he used to love. We’re thrilled for him to walk us through his illustration process in detail today for a piece called Everything. Sit back, grab a pen and paper, and soak up all of the tips Gregory has to share.

A quick preview of an illustration that I'm currently finishing up. Just a few more details to add here and there. 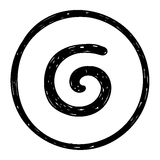 My aesthetic varies somewhat and I tend to find the question ‘describe your style’ often quite tough to answer. Mainly because I try to mix things up as much as possible. I’ve always felt that being an illustrator or an artist with a very unique visual style isn’t the apex of the discipline at all. Instead, I feel that the comfort, freedom, and skill associated with being able to change, update, and constantly evolve your approach to any project is far more valuable. I guess the trick is dedicating time to practice and to experiment with different styles and approaches as often as possible in order to reach a high level of comfort with a handful of aesthetics. In terms of inspiration and influences, I tend to lean on nostalgia somewhat as a form of expression, illustrating what I loved as a kid and still love today.

This illustration titled Everything was created for Courtside to help show the process I generally follow when creating any illustration from start to finish. As always, the style is pretty adventurous with this piece—implementing techniques and tricks that I’m familiar with and teaming them up with a few new ones along the way. Everything was created in Procreate on a 12,9” iPad Pro, but the general process should be applicable to any design software you use. 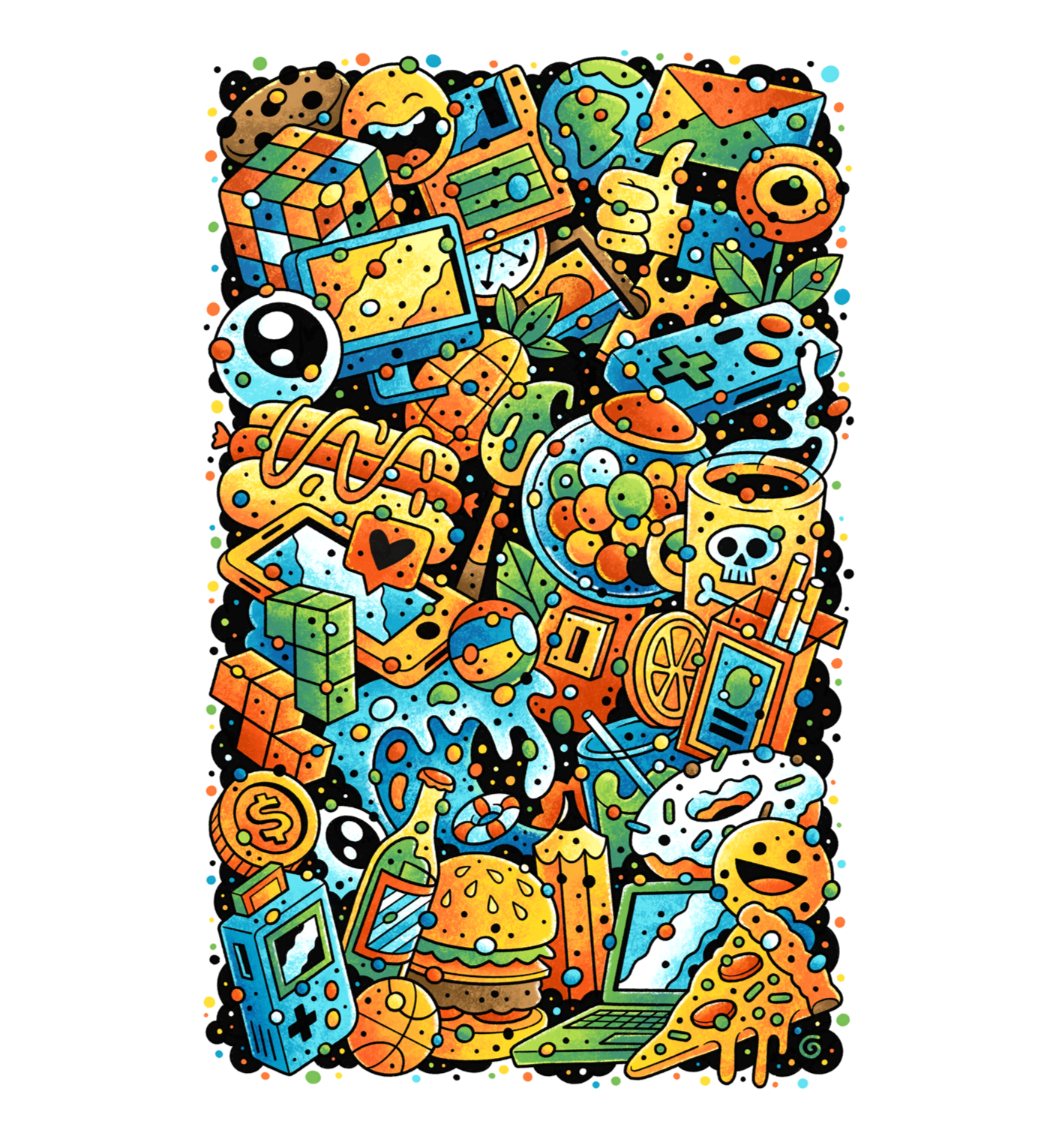 Everything starts with a sketch. I often have an image in my head that’s pretty refined as well as a list of objects and elements I want to include in a piece like this. But I always need to go through the process of laying down some rough lines and shapes to gather the base composition and structure of the illustration up-front. I started placing in the shapes from the bottom left corner, working my way across the page and then upwards. With each element, I try not to create too much open space or ‘holes’ in the illustration. Once the quick, rough lines that define density and the overall structure are done, I then look at each of the objects and their forms to see if any will clash later on down the line—I consider shape, detail, and potential color overlaps too. If anything needs to be adjusted I’ll rework that space and once finished, it’s time to refine it all. 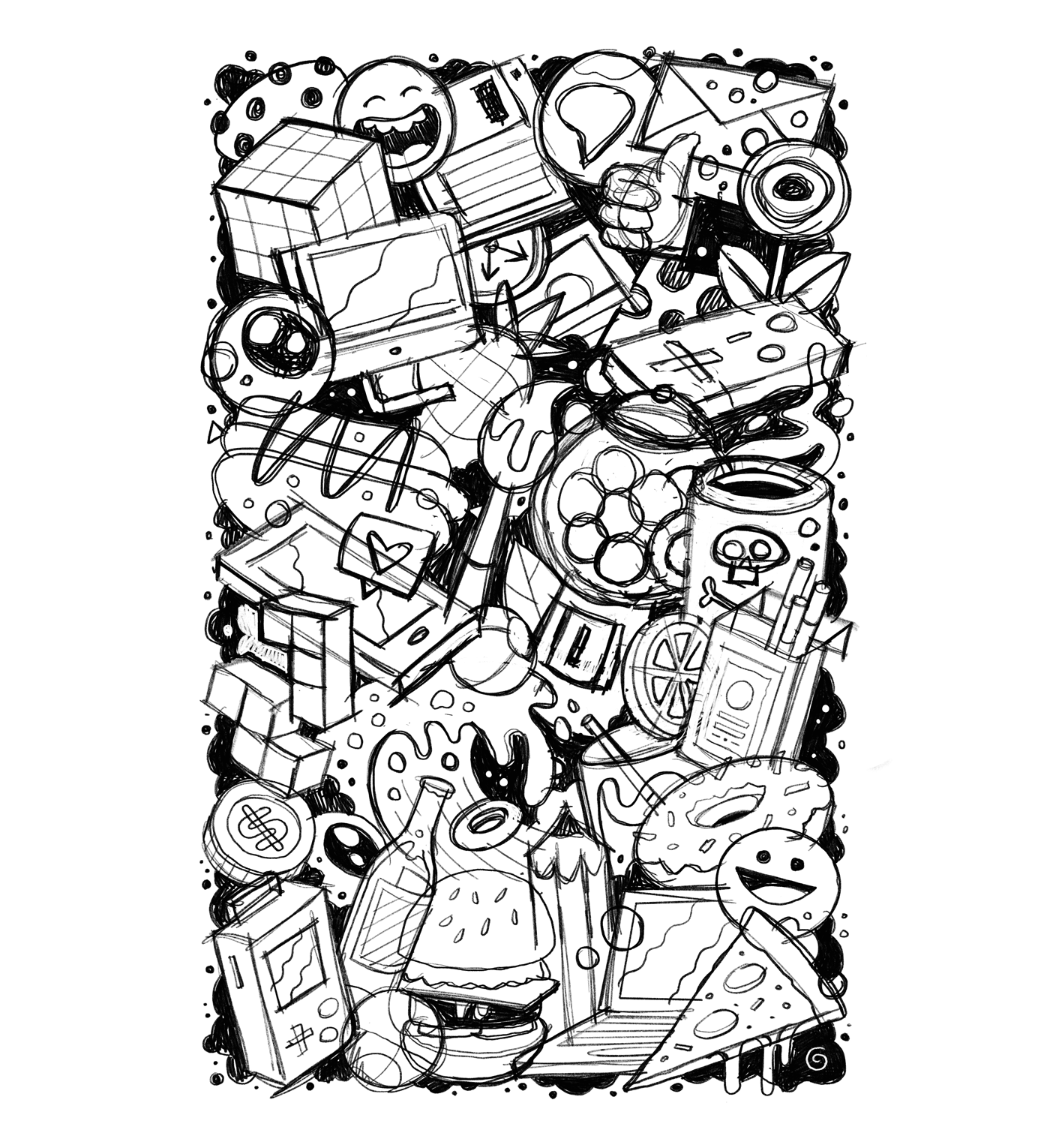 I’ll start by lowering the opacity of the rough sketch and place a new layer on top of it. I use this as a guide to go over each of the objects while I clean-up the shapes, lines, and any additional details. This is also a crucial stage in the process as I prefer to spend time ensuring that the line-work sits in the right place now rather than later. It will ultimately provide a much more reliable base when the next step begins. At this stage, I am also aware that there are some open spaces here and there, but my aim is to eventually add smaller shapes and circles all-over the illustration. This stage is also a great opportunity to swap out any objects once again if I don’t think they are working well in their refined state. 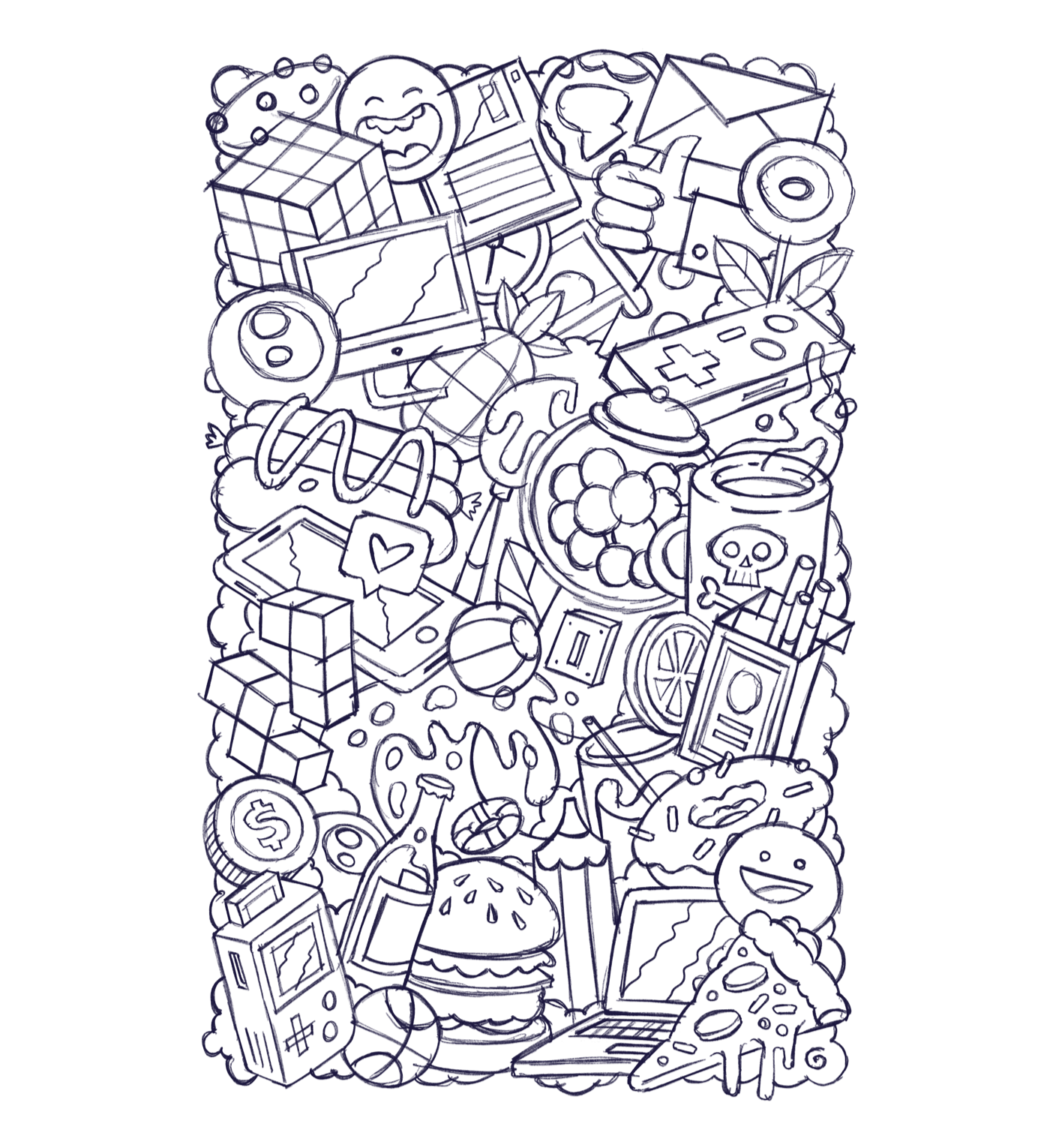 With the refined lines placed, I repeat the process of lowering the second layer’s opacity and placing another layer above it. As mentioned previously, having this new refined guide will yield less guess-work. Another crucial decision pops up here—line weight. I tend to quickly illustrate one of the objects to identify if the line weight works, usually the busiest object. I don’t want it to be too thin and ultimately get lost but I also don’t want it to be too strong and overpowering. If my current selected weight isn’t working, then I’ll rework that object until it looks right. Once that’s decided, I usually pop some headphones on and get down to laying down the lines. I use Procreate’s default Dry Ink brush because, in this case, using an ink brush that has a soft, irregular edge with a hint of texture is a perfect fit. I ultimately know that I want this piece to have a more natural, textured finish, so using a softer, textured brush will complement those details later on. 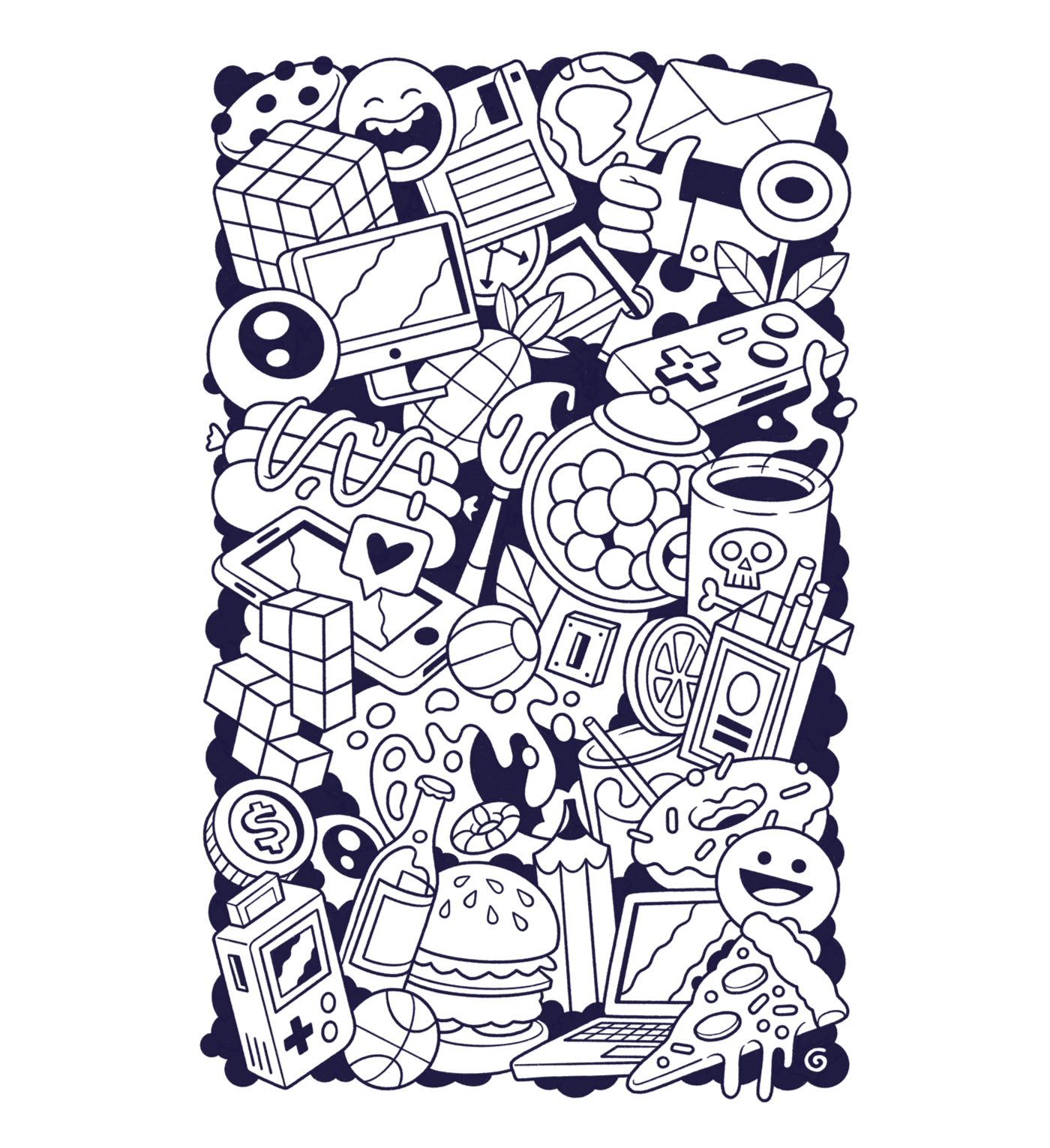 Now that the line-work is in place, Everything looks like it could use a few more shapes thrown in to fill some of those empty spaces and to add a level of overall ‘busyness. I create a new layer once again and meticulously go over the entire illustration, adding in circles and bubbles to the edges as well as in between and over the objects. Placing these shapes over some of the existing object lines helps break them up a bit and really amplifies the feeling that everything is tightly-packed and overlapping. In addition, these shapes will also help break-up the blocks of color later down the line. 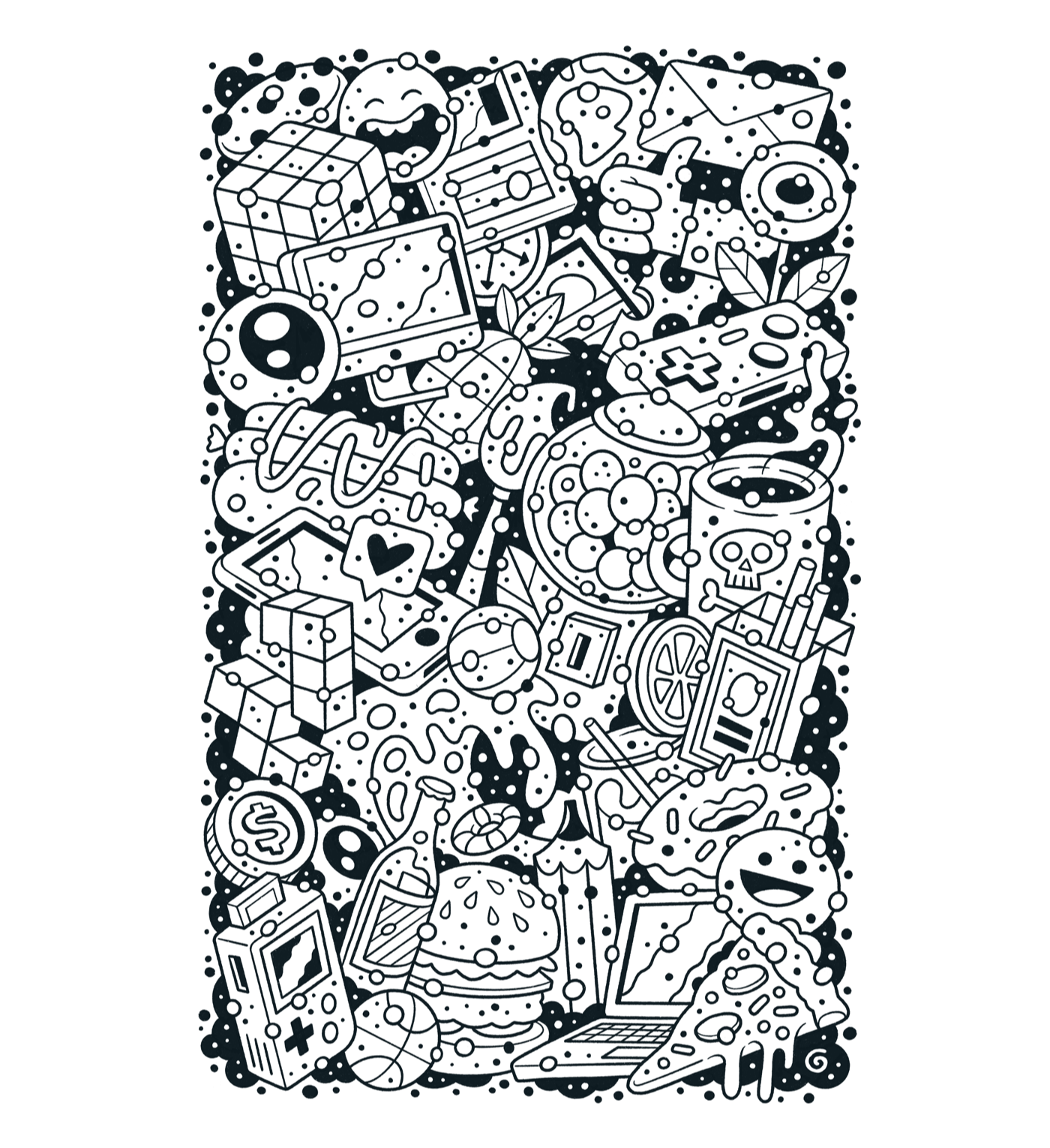 I often spend way too long playing with colors, only to revert back to the color palette that I originally had in mind. For me, primary tones not only work well together but make life so much easier when assigning colors to objects. Especially when working with a busy illustration such as this one. With so much going on, I want the objects to be instantly recognizable and color will definitely help with that. Certain objects are typically seen in particular color-ways, so I start with those in order to see which tones initially dominate each area of the illustration.

Once those objects are color-blocked, I then move onto the surrounding elements trying my best to avoid having two shapes of the same color overlap. This not only helps to avoid big clumps of a single color, but also visually distinguishes one object from another really easily. Then the third step is to color each and every detail circle, again, making sure the same color doesn’t overlap itself. A quick tip for this step is to assign a new layer to each color and/or tone. This saves a ton of time if you ever want to tweak a color or change it completely. You can simply alpha-lock the layer, select your new color, fill the layer and then remove the alpha-lock. Presto. (A clipping mask will also work just as well for this trick too, alpha-locking is simply my personal go-to). 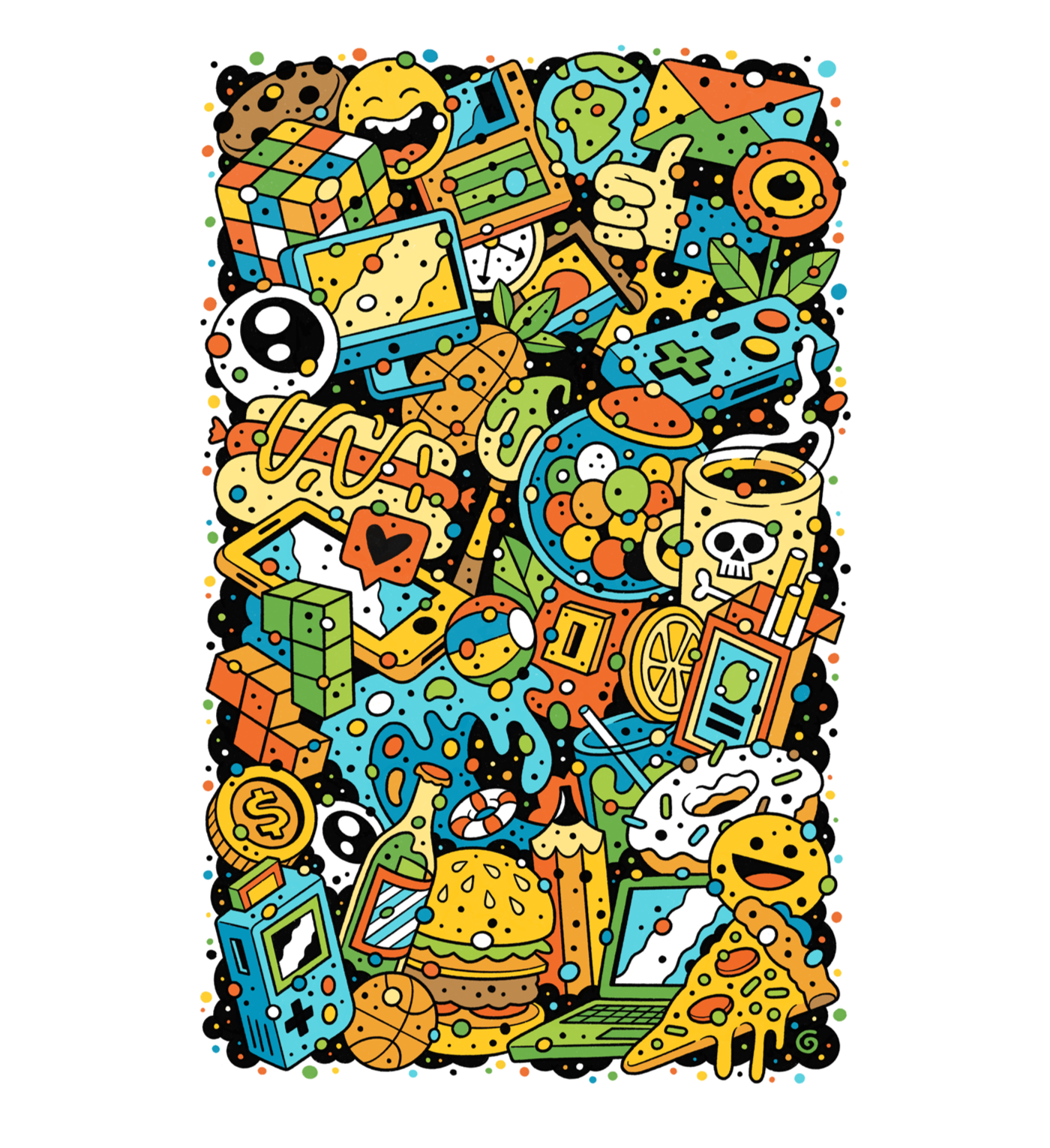 Once all the color has been set in place and Everything is evenly balanced, I duplicate each of the color layers and set each to be alpha-locked. Duplicating isn’t necessary, I just like to have a clean backup ready to use, just in case. I can now easily sample the base color and mix darker tones to texture it. The alpha-lock also saves time when applying each texture as I don’t need to erase any overflow outside of the shape. My go-to texture brush at the moment in Procreate is their default Charcoal brush called ‘Burnt Tree’, which is used for all textures applied.

I gradually go through each of the objects, adding two stages of texture—first a deeper tone, then a slightly darker tone over it, concentrating on areas that would naturally be shaded. In this case, the light source is in the top right corner, so the shadows are placed on the lower left-hand side of each object. Then, once I’m happy with the contrast and density of the darker textures, I go back and start all over again but this time with textured highlights. Once that’s completed, the final step is to then flatten the artwork and pull the curves ever so slightly to amplify and saturate the colors just a bit more.

And that’s a wrap!

Want to keep up with Gregory? Find him on Dribbble, Instagram, and gregorydarroll.com.

Did you enjoy this tutorial? Make sure to check out the other illustration processes in the series from Terry Edward Elkins, Montsouris, and Ranganath Krishnamani.