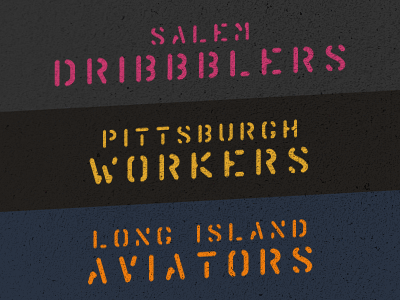 You've seen the Jon Contino-designed Dribbble shirt on United Pixelworkers, right? Would you like to win one for free?

We've teamed up with Coach Jon Contino and Coach Jay Fanelli (from United Pixelworkers) for an Official Dribbble playoff.

Here's the deal: We dreamed up three fake basketball teams from the 1920s: the Salem Dribbblers, the Pittsburgh Workers, and the Long Island Aviators. Your challenge is to take one of these teams and design a logo, a wordmark, an identity system, a uniform, whatever you want. Your design is not limited in any way, but try to keep their team colors close to the shot above (Dribbblers: pink and grey, Workers: black and yellow, Aviators: navy and orange).

- The rebound with the most overall likes.
- The three rebounds (not including the overall winner) with the most likes for their respective team.
- Coaches pick: Dribbble HQ, Coach Jon, and Coach Jay each pick their favorite rebounds.

Here are the particulars:

- Make sure your shot is a rebound of this shot, or else it won't count.
- Your rebound should focus on only one of the three teams.
- If you want to design each of the three teams, make them separate shots.
- The contest ends Monday, June 4 at 2pm Eastern.
- The winners receive a free Dribbble + United Pixelworkers + Jon Contino shirt, the glory of victory, and whatever other goodies we feel like throwing in.
- Like all playoffs, the designs you create are never used by anyone. This is 100% fun.

That's it. Go get 'em, and good luck to all Dribbblers.