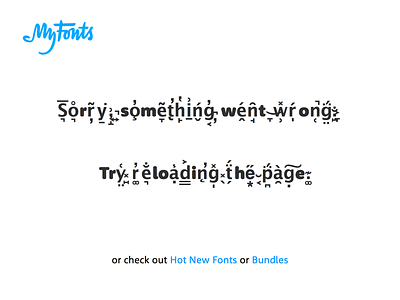 This error page is one of my favorite one-off things I've designed for MyFonts.

If you’re confused by what’s going on here, here’s an explainer:

All those crazy characters aren't an image. That's all live text:

We can make this effect by using combining unicode characters to do some weird things. What's combining unicode? Some languages (not English clearly) use letters and diacritics (accent marks) that have to combine in certain ways, including stacking on top of each other. By stacking up a bunch of characters in ways that were never intended, we can get effects like this. So that’s where this super meta error page comes from!

During the process of making this, we also learned that combining unicode is very unpredictable between browsers. The original version of the design had a lot more stacking diacritics, but we ended up having to take a lot of them out because it made the text completely illegible in some browsers. (Sorry / thanks to our front end dev for putting up with this ridiculous project.) So far this error message has been organically discovered and appreciated by a grand total of two people who posted about it on twitter. WORTH IT.

If you're interested in playing around with combining unicode, google for zalgo or glitch text generator. There are a lot out there but here’s the one I used to make this message: http://www.eeemo.net

Fittingly, you can usually trigger the error message by entering zalgo text into the search field on MyFonts.