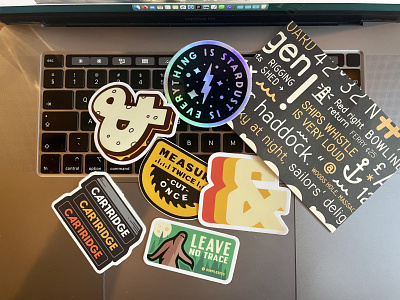 Is posting swag on Dribbble a thing? Anyway, rhetorical question.

Dan has been my favourite old-schooler, from the time when the web was a wild wild place.

I was learning so much from him in the early days of my career, back in 2006. I was secretly inspecting his CSS code trying to uncover how he makes websites that don‘t break in IE6. Yeah, that was an undertaking in the past.

I was stealing his 50 shades of beige from his website, and trying to uncover how many dots on a grainy body background are just enough to make an interface look perfectly campy.

I also read his meticulously written books on HTML, CSS and community, and now testing his weird fonts that might not be so versatile as the high-end corporate fonts, but are instilled with his personality of an eternal maker of creative bits.

Thanks for the stickers, Dan. It reminds me once again, how powerful offline marketing can be if done with love and care. 🤘 Once I save enough, I‘m definitelly doing it for my startup Tribevibe.