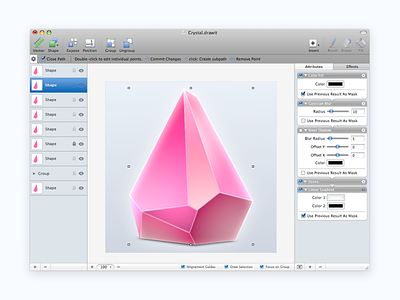 Around 2007, after being really fed up with using Photoshop as a UI design tool, I decided to look for alternatives. Eventually, I found the website of Pieter Omvlee, who was working, on his own, on a cool software called DrawIt. I started using DrawIt, but soon realized that it could benefit from some visual design and usability improvements. Interestingly, Pieter had a “Chat with me on AIM now” button on his website, which was showing him online. I decided to contact him and offer my services as a UI and visual designer. We worked for months together on a new version of DrawIt, that we released with some good feedback from the community.

During the development of Fontcase, another app I worked with Pieter on, I traveled to San Francisco for vacations, and ended up getting an interview (and a job!) at the mothership.

As an Apple employee, I could no longer work with Pieter on DrawIt or Fontcase, so I introduced him to a dear friend of mine, Emanuel Sá, who took over work on both apps. It was not long after that they released a new version of DrawIt, with a new app icon, a new rendering engine, new UI elements, and most importantly, a new name, Sketch.