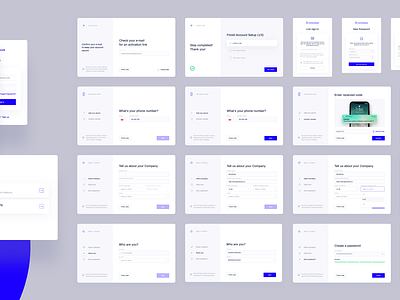 Mornings! 👋 It’s a big milestone for Contractbook - we have just released a refurbished Registration process for new users! 🎉

The main goal that guided the behaviour and outcome of the whole process was to eliminate friction, mainly by getting rid of mandatory e-mail and phone confirmations that were required to access the system. Instead, in this redesigned flow we allow users to confirm these later - they are allowed to play with the product right away, just by inserting their e-mail.

Another goal was to qualify new users - up until now, the only thing we knew about them was if they were a private person, or a company. Now, we’re getting more information about them - such as company size or industry - which helps qualify leads & prioritise work for the Sales team.

As mentioned, users can roam freely to test the features of the product. There’s a list of certain edge actions though, which - for security reasons - cannot be performed until users confirm their accounts by:

The trifecta creates a process that goes by the name “Finish Account Setup”. We prompt the user to complete it right after signing up, but they can skip it to have a look around. Allowing these to be finished later practically eliminates signup friction.

🤓☝️ We send secure login links to an e-mail user inserted when signing up. Basically, up until the point user sets up a password in the “Finish Account Setup” process, their e-mail account will act as a password to their Contractbook account.

Every time a user logs back in, we check if they have finished the entire “Finish Account Setup” process - if something’s left off, we will prompt them to complete one of the remaining steps.

There’s a lot more happening under the hood and a lot more than I could possibly explain - I suggest you try it out yourself & let us know what you think!

HUGE kudos to the entire Contractbook team for making it all happen! You rock! 🙌🎉💯