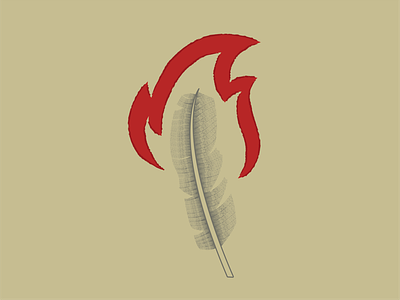 The story of Icarus isn’t one of a god, but instead a tale of warning. As the Greek myth goes, Icarus was the son of Daedalus, the famous craftsman. After crafting the Labyrinth (yeah, THE labyrinth—the one that was meant to imprison Minotaur, the half-man half-bull), King Minos of Crete decided to lock Daedalus and his son Icarus in said labyrinth. As the story goes, Daedalus gave Ariadne (the laughter of Minos) a ball of string, which she gave to Theseus (Minos’ enemy) to help him escape the Labyrinth. #drama

This is the story from which the idiom “don’t fly too close to the sun” was born. And that, boys and girls (and all you other nifty genders), is your mythological weekly fun fact.
-
Shoutout to @ryan_q3l for the push/challenge to make this a series. Coming up next will be Anubis (by request of @evilsushidesign) or Zeus—I haven’t decided yet.
-
The first image is in an offset style I’m obsessed with, and the second was really an exploration of a brush pack I forgot I’d purchased from @retrosupply. Using a combination of the Grave Etcher and the Organic Linework sets, I was able to get the effects I was aiming for.