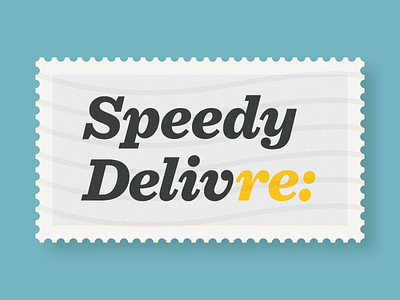 How did it start?
Have you ever been scrolling through social media late at night or first thing in the morning, only to notice that you're getting bummed out because you missed that one event OR you keep comparing yourself to your friend's travels/achievements OR you're sick and tired with the political climate? That's how I've been feeling lately.

I randomly stumbled upon a GIF on reddit that made me feel so damn good. I wanted to see more content like that — heck I didn't even want to search for it. Wouldn't it be nice if that came directly to my inbox?

For now I'm starting with a twitter account and I'll probably create some sort of long-form email subscription in the near future.

The concept:
I started thinking about things that make me feel good. One of the first thoughts I had was of Mr. Rogers and Mr. McFeely (remember those guys?).

Mr. McFeely has a little saying he does every time he shows up at Mr. Roger's door: Speedy Delivery. I took that and merged it with something you see in email when someone replies to you, RE:, to further promote the concept of sharing/communicating. Mr. Mcfeely was a mailman, hence the stamp.

It's a silly idea and I'm sure it's been done before, but that's not the point. I just want to create a little bit of joy where I can.

Always open to honest feedback and critique — glad to be here!

Shoutout to @Nate Garvison for the invite — huge thanks man!