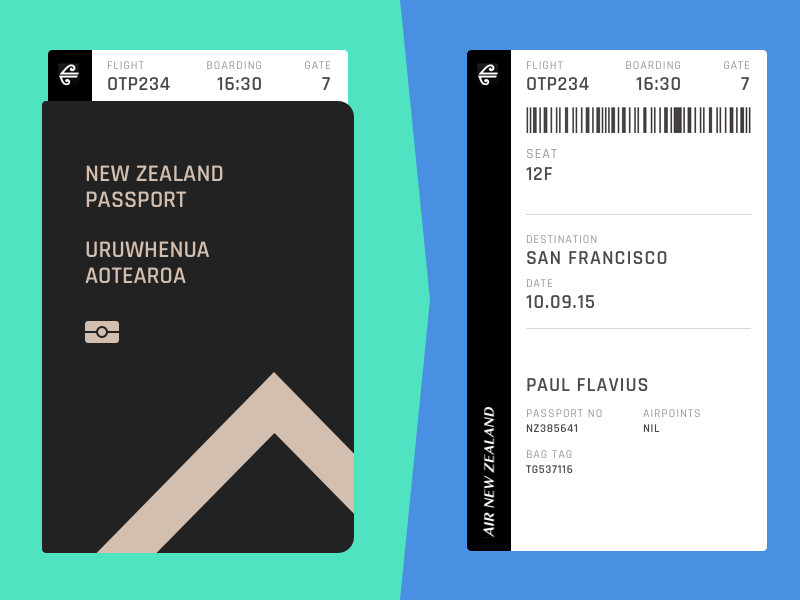 Ah, the old boarding pass design challenge. I never took part when this was super popular a couple years ago, so here's my take.

- Passports seem to be a standard size, so it's annoying that tickets are so much bigger. It would be nice it they were sized so that they slot inside of a passport.

- There's certain information that you need to check yourself into your flight, but once you've done that and you get your boarding pass, you only need a few pieces of information to get you onto the plane. Namely, the gate and the time you need to be there by. You'll probably check your flight details on the boards several times, so your flight number would be handy too. These are all at the top of the pass so that you can see it sticking out the top of your passport when you slot it in.

- Pull the ticket out a little more to expose the barcode so it can be scanned at the gate.

- The remaining piece of info is your seat, which is the next bit of info.

- The rest of the details aren't critical so they come further down.

- The ticket also has to be plain enough to be printed by the basic ticket printers that airlines use. An AirNZ ticket prints in two font sizes which is what I've used.

One last thing: the mockup of the NZ passport I made has a hat tip to Aaron Dustin's (@various) red peak flag; the flag that should replace the current NZ flag if it is decided that it should be changed.