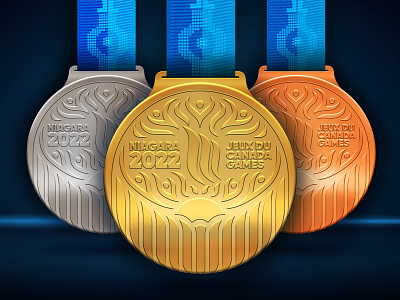 There are five key features incorporated within the design of the medals and the lanyard. They include:

Niagara Falls: Divided into 13 waves at the base of the medal, the flow of Niagara Falls represents Canada’s 13 provinces and territories, the 13 municipalities in Niagara that have come together to host the 2022 Canada Games, and the 13 ceremonies of the moon celebrated annually by the Haudenosaunee and Anishinaabe peoples — the original residents of Niagara;

The Sun: Found behind the falls, the sun’s inclusion is representative of its crucial role in sustaining life and in the growth of Niagara, along with the Games’ summer schedule;

Seventh Generation Principle: The seven human figures on the design of the medal acknowledge an ancient Haudenosaunee philosophy that the decisions we make today should result in a sustainable world seven generations from now;

Niagara Escarpment: Different depths and levels were embedded into the medal to represent the Niagara Escarpment, which is one of the most prominent topographic features in North America and the backbone of Turtle Island; and

“It's finally starting to hit me. With the Games just around the corner, the official reveal of the medal will bring with it a sense of accomplishment and relief, a feeling I'm sure I'll share with many of the athletes as they embark on their Canada Games journey,” added Shaun O’Melia, a resident of St. Catharines and an alumnus of Niagara College who was selected as the winner of the medal design program out of a group of over 45 applicants back in July 2020. “After countless hours, numerous iterations and unexpected delays, I am happy to know the medal design was able to live up to the test of time. Upon revisiting the design, I wouldn't want to change a thing."

Held every two years, alternating between winter and summer, the Canada Games are the country’s marquee event for amateur sport representing the highest level of national competition for thousands of up-and-coming Canadian athletes. The 28th edition of the Canada Games will mark just the third occasion in the event’s history that it will have taken place in the province of Ontario and the first time in 21 years. In total, more than 5,000 participants and close to 4,500 volunteers are expected to take part in the Niagara 2022 Canada Summer Games scheduled for August 6-21, 2022.