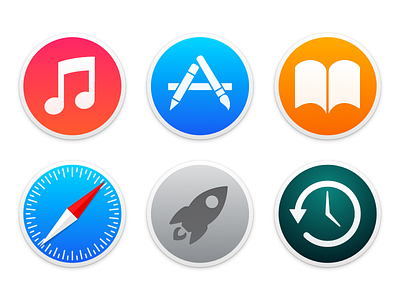 Previously, OS X had three very similarly styled app icons: iTunes, App Store, and iBooks. However, each had a slightly different style. They were close enough to make a strong connection between them all, but different enough that it looked incredibly sloppy. Yosemite was finally supposed to fix this. Not quite. They're all still slightly different. It also brought up several new problems. They're now all very similar to their iOS counterparts. This is a good idea, but the Mac icons feature significantly stronger gradients, inner shadows, and heavy drop shadows. It's a clash of many different styles that ultimately just does not look good. See http://www.apple.com/osx/preview/design/

This afternoon, I decided to redraw these six circle icons to how I would like to see them. Sure, call this an unsolicited redesign, but I don't think there's any denying that the styling could be more consistent and harmonize a bit more with the iOS versions.

There are still a few issues you might point out:
The music glyph is different than Music or iTunes apps. Yes, I much prefer this one.
The iBooks glyphs is different than the iOS version. Yes, but I feel the shape introduced in iBooks for Yosemite is stronger. I'm hoping the iOS version follows suit.
There are drop shadows on the needle for Safari here, but not on iOS. I think that since Mac app icons still have drop shadows, subtle shadows in use within the icon is appropriate.