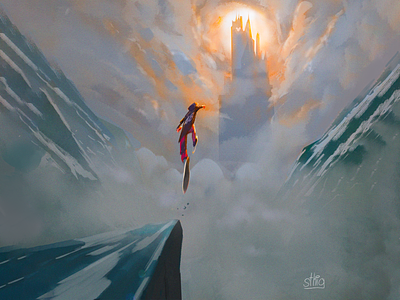 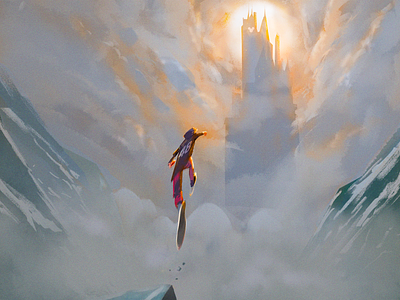 So what does a level 48 do? Resigns from their job, takes a leap of faith, and goes back to the art industry.
--
This image is me, four dozen years old, refusing to let my art go to waste. From the 90s until the mid-2000s, I was an illustrator. I freelanced for companies like The Wall Street Journal, Coca-Cola, McGraw Hill, Penguin Books and, I even had a brief moment working on Shrek at Dreamworks. (I worked on the interactive trivia DVD that went with the movie).

The 2007 recession, a string of terrible luck, and poor decisions left me with nothing. I was out of money, a failed marriage, and my confidence in my artwork crumbled. It has taken forever for me to crawl out of that dark space in my head.

It's a strange and scary time to do something later in life, I struggle with "Am I too old?" or "Am I even relevant anymore?" I could be, but I'll be damned if it'll stop me as I really can't be anything other than an artist.

I'd rather go crashing down fighting like hell doing something I love than do something that gives me no quality.

For all of you who are struggling with age, being relevant, imposter syndrome, and wondering if you're ever going to be good enough, you are indeed enough. Maybe you need some art lessons or new marketing; All this is doable.

It's hellish at times; sometimes you see no progress, there are times that tears are required, and introspection happens often, and that's called "being an artist."

When the hard times come, I look to Calvin Coolidge for assurance:

"Nothing in this world can take the place of persistence. Talent will not; nothing is more common than unsuccessful men with talent. Genius will not; unrewarded genius is almost a proverb. Education will not; the world is full of educated derelicts. Persistence and determination alone are omnipotent. The slogan Press On! has solved and always will solve the problems of the human race."