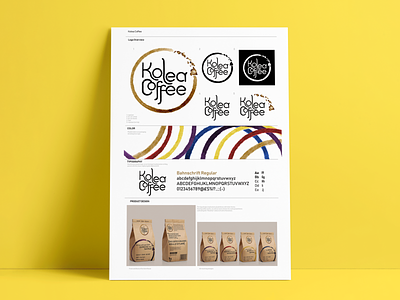 Kolea Coffee is a coffee bean coffee company based in Hawaii, the only state in the US to grow coffee beans. Coffee bean plants were first introduced in Kona on the big island in 1825 as an experiment to observe if coffee could be cultivated in this rich environment. Now almost 2 centuries later coffee is still grown in Kona and beloved by coffee drinkers for its unique boldness and cacao flavor.

The brand style was conceived when a coffee ring formed inside my notebook from a morning pick-me-up. The logo itself is mixed media, painted with morning old coffee, India ink, charcoal, and watercolor for fullness. By including coffee itself in the design, it adds another dimension and uniqueness from other brands. The branding emphasizes playfulness with letter forms, flowing coffee stains, as well as name choices for each brew, further cultivating the “Cheehoo” culture of native Hawaiians.

A center focus of this brand is sustainability, I chose eco friendly biodegradable coffee bags made only using a specially formulated paper and string to hold the top closed. No metal clips that wind up in oceans where fish, birds and other species may ingest or be harmed.

A large part of this process however was navigating native Hawaiian culture. Early on, research was conducted of Samoan customs and the Pigdin language of the Hawaiian islands. I was determined to incorporate tribal tattoo based forms, in a culturally respectable and enlightening fashion. Unfortunately, later I learned tribal art is very niche between tribes, and is often misrepresented in media through films like Moana, tribal tattoo artists outside of Hawaii, and even in Washington DC with Tiki bars perpetuating this climate. Due to tribal art appropriation as well as this being a stigmatized view of Hawaiian’s, it was scrapped immediately but is still a very important conversation to have when designing for culture based brands and organizations as an outsider.