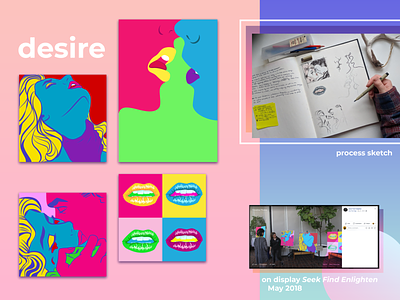 Desire is a four poster activism series based on the #metoo movement, showcasing the trials and tribulations femme individuals face, as well as affirmation. Desire was first inspired by Andy Warhol’s Marilyn Diptych in the Hirshorne Museum. Around the time of this series’ conception, the metoo movement was gaining traction everywhere in the US. My goal was to create something to challenge the stigma around rape and showcase intimate vulnerable moments.

I interviewed students and adults, surprisingly to me at this time, most had at least one unwanted experience in their lifetime, just as I had. I sought to capture their stories of fragility, memorializing these emotions in a new light and hopefully evoke new feelings of triumph. These awful things happened, but they do not define a person, they are snippets of time.

After gathering notes, I began to sketch, developing many iterations of positioning and styles, until I came to a 60s pop-art approach with modern clean vector elements, mimicking a screen-print.

This series is not just one story it is meant to depict a singular persons experience, they can be aligned in any order to tell a number of stories tailored to anyone.

Desire was on display at Pathways, an event hosted by Seek Find Enlighten at Birmingham University, New York on April 22nd 2018. The curator, Philip Demearest sought to focus on differences in perspective, individuality, and the promotion of ideas.