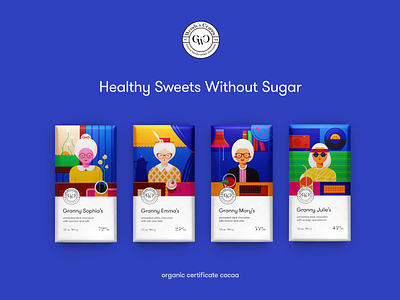 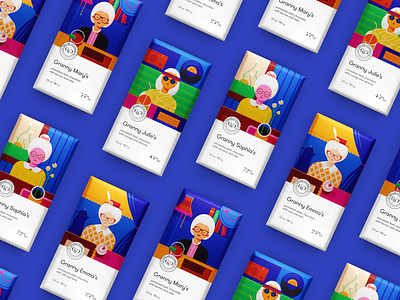 This Thursday (September 17th) Outcrowd will have a live stream on Instagram with Q&A about our agency, works, and many other things you all want to know. You ask and we give the answers. Don't miss it!

Now, let's get back to this amazing work we've created recently with our team. Wendy's Granny natural chocolate manufacture.
We know there are a lot of people (Dribbble community isn't an exception) that can't imagine their lives without a piece of chocolate. For us it is not only about sweet taste, chocolate is like fuel for our mental processes. Also, we have some interesting facts about chocolate.

Did you know that chocolate is about 4000 years old? Anthropologists have found evidence that chocolate was produced by pre-Olmec cultures living in present-day Mexico as early as 1900 B.C.

Olmec, Mayan and Aztec civilizations found chocolate to be an invigorating drink, mood enhancer and aphrodisiac, which led them to believe that it possessed mystical and spiritual qualities.

In the 1500s, Spanish conquistadors such as Hernán Cortés who sought gold and silver in Mexico returned instead with chocolate. Although the Spanish sweetened the bitter drink with cane sugar and cinnamon, one thing remained unchanged: chocolate was still a delectable symbol of luxury, wealth and power. Chocolate was sipped by royal lips, and only Spanish elites could afford the expensive import.

Spain managed to keep chocolate a savory secret for nearly a century, but when the daughter of Spanish King Philip III wed French King Louis XIII in 1615, she brought her love of chocolate with her to France. The popularity of chocolate quickly spread to other European courts, and aristocrats consumed it as a magic elixir with salubrious benefits.

Amazing facts, isn't it? You can read a little bit more right here.

There will be more so stay tuned!

Drop us the line hello@outcrowd.io