Some of my favourite posters this year. 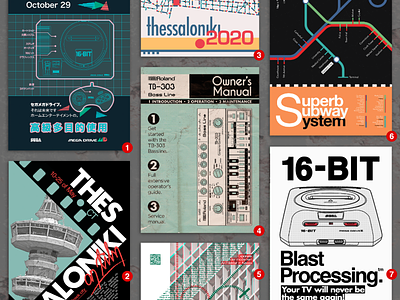 1.- Sega Mega Drive Japanese promo mock-up. Used Photoshop and lots of Google translate to do this one. Kept the styling diagrammatic and cyberpunk. 100% Ps vector.

2.- Thessaloniki on film mock-up poster. Created layout with InDesign. Took a photo of the tower itself, edited / monochromised and removed background in Photoshop. Also made "on film" decal and the film roll frame in Photoshop, based on an Agfa slide I have.

3.- Thessaloniki 2020 is a little map tracing project I did in Illustrator. I stylized the map a bit, making the streets perpendicular and the corner angles 90° degrees. I also made the overall look reminiscent of Piet Mondrian's work.

4.- 303 owners manual poster. I arranged this with InDesign, after drawing a perfect vector replica of a Roland TB-303 bassline on Photoshop. Then I gave it a worn paper look again on Photoshop.

5.- Alpha poster. Firstly I took a photo of the Alpha Bank building located in Kavala, Makedonia, Greece, on film. Then I removed any perspective distortion with Photoshop, giving it a clean isometric look. Lastly I used Google translate for the German captions, and put everything together in Illustrator.

6.- Superb Subway System, is another mockup poster I did, mimicking subway transit diagrams. Made with Illustrator.

7.- Mega Drive II is a B&W vector poster I made 100% with Illustrator. I used a photo of my own unit and pathtraced it by hand. I kept it in white negative space to be able to print it easily on work's laser photocopiers. And I did!