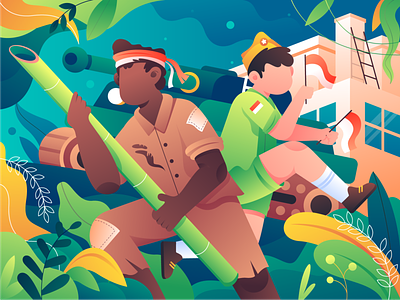 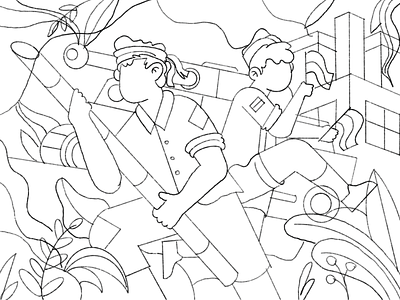 Hari Kemerdekaan also known as Tujuhbelasan 🇮🇩 ( the seventeenth ) is a national holiday in Indonesia commemorating the anniversary of the Indonesia's Proclamation of Independence on 17 August 1945.

Besides a national formal flag hoisting ceremony, there are so many traditional games and competitions usually held during Tujuhbelasan, like Kerupuk-eating race, Marble in spoon race, Panjat pinang, Baloon dance, etc.

If you look carefully at the illustration, there is a building behind the characters, that's Hotel Yamato. The hotel was the site of the famous "Hotel Yamato Incident" on 19 September 1945 when pro-nationalist Indonesian youth revolutionaries tore away the blue portion of the Dutch flag flown above the hotel to change it to the red-and-white Indonesian flag in the lead-up to the Battle of Surabaya. Also, the characters wear veteran uniform and Bambu Runcing ( Spiked Bamboo ) as traditional spear made of a sharpened bamboo.

What do you think about this shot? and what do you usually do to celebrate your national day? 🥰