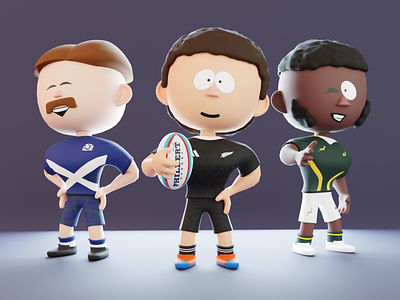 As some of you may know, I'm working on my rugby game for quite a while now. This project, apart from pursuing a childhood dream of making my own video game, serves a couple of purposes. I wanted to learn Unreal Engine, improve my very basic 3D skills, and most importantly graduate from college with a Master's degree. One of the first things I made for my game was a rugby player to have something I can work with already. But as time passed the shitty model I made back in 2017 started to be very limiting, all the things I made wrong, having no idea what I was doing started to pop up.

Further working on the project began to irritate me when I was trying to make some more sophisticated animations. So I decided to make the rugby player model from scratch. With the lessons learned what I did wrong, and having a better vision of what I wanted to achieve, I made these guys as proof of my concept. My game has cell shading style, so in the engine, it's going to look even more cartoony, so I'll post them once again when I make necessary adjustments for Unreal Engine. Anyways, if I ever wanted to make a limited edition figurine for my game, I have a sort of idea how it could look like. 🙂

Of course, I wouldn't have any license for teams and players, but here I decided to use real teams to show a concept. All copyrights for logos are property of their owners. I hope nobody sues me 🙂