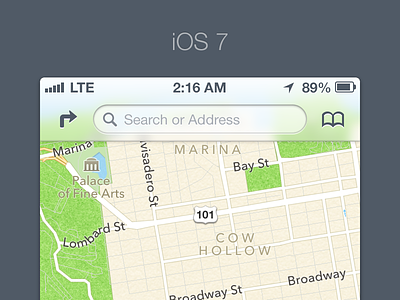 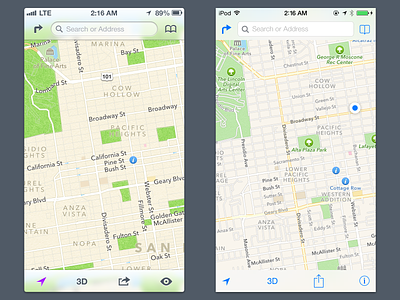 So after fully digesting all of the various details in iOS 7's new UI design (or at least those present in the first beta), I've gathered some thoughts on it.

I was initially extremely disappointed in not just the overall style, but the actual execution of that style. I realize Apple is keen to update the visual style of the OS after so many years, but in attempting to differentiate from all previous versions, I believe they pushed a bit too far in the opposite direction (note that all of this is referring to the visual/UI design- everything I've seen/used with regards to the UX/interaction design is top-notch, as always).

I'm starting to warm up to the general 'lightening' of the UI, as it lends a clean, airy feel (not that the current OS suffers from the opposite, but the new aesthetic is indeed refreshing, so I think they succeeded there). Having said that, I think the core issues revolve around the execution of that aesthetic. The UI has indeed been 'flattened', but when combined with the overall lighter color scheme, it seems to lose a sense of visual order and hierarchy, with many of the apps suffering from their content blending in with controls and making it difficult to distinguish exactly what is interactive (borderless textual buttons, lack of gradients and drop shadows to separate nav bars/toolbars from view content,...)

I'm convinced that the sweet spot lies between the two extremes, and I think the UI could benefit from taking the best of both styles to create something new and refreshing, but still discoverable and intuitive.

So with that in mind I've mocked up a version of the new Maps app which I think does just that (check out attachment for full pixels and side-by-side comparison). Some notes:

- One aspect of the new UI I absolutely love is the unification of the nav bar and status bar- it feels extremely clean, and makes the status bar subtle and more unobtrusive than ever.

- With regards to the translucent nav bars and toolbars, I also like this a lot, and it does serve to more visually tie the controls to their content. However, I've added subtle gradients and shadows to them, as I think without them, the bars get lost in the content and it can be difficult to discern where they begin and end at a glance.

- I brought the existing toolbar icons over from iOS 6, as I think this was really a case of 'fixing' something that wasn't broken. Not only do the 'old' icons still look great and communicate their purposes clearly, but I see multiple issues with the new ones, including unclear meanings (bookmarks, action sheet, 'i' button), inconsistent visual weights, and incorrect sizes in relation to their containers (the toolbars). I'm also not sure about the 'tint' color yet- I don't really see what value it adds, but it makes it a bit more clumsy to add highlighted states when the icons sort of already look 'highlighted'.

- And finally, although the updates to the visual design of the maps themselves aren't terrible, I think the existing style is still superior (a bit more rich and vibrant, which I thought was what they were going for with the new UI?), but that's a minor point compared to the others.

And that's about it. I have calmed down a bit after my initial shock at the changes (except for those home screen icons ಠ_ಠ), but I do think there's a lot of room for improvement. Ideas, thoughts, opinions?