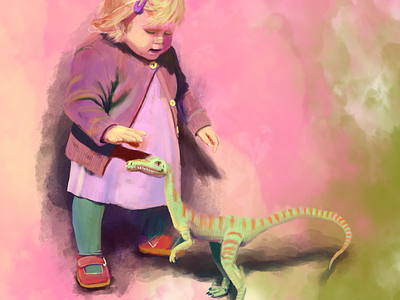 "I remember this episode back when we first discovered dino worlds. It was the early days, everything was new to us all; to her as well. She used to allow for a different proximity back then, a permission if you will. It was common for us to witness her jumping back into our world once she was done with whatever world we were in. On that particular day I saw her snatching a Compsognathus' egg and carrying it through the portal. A Compsognathus, of all things! The motives, if any, still elude me to this day. She was very different back then, though. More human, perhaps... whatever that means, right? It's a fact that in the present day we can't see the world as she sees it, but after years of observation, some theories began to come up. In a sense, it's like comparing our perception of the world, as humans, to that of a dog or other such animal. As a human, you experience things based on ideas, on things that other humans named, pointed, created throughout History. You have a moral compass, a bunch of evolutionary guidelines, and words. Lots of words. There's words for everything. Descriptions and concepts for everything. A dog has no such thing. It has its instincts, its basic needs. With all our complexity, we can't perceive the world as a dog does, but imagination allows us to theorize and visualize it in our minds, as flawed as it may be. And with that same imagination we are able to understand that the complexity of how she experiences things must go way beyond our comprehension. Words, concepts, all of those things that support our understanding of what's real, I have a feeling they are now obsolete to her. If, in the sense of perceiving reality, she were to be compared to the human levels, humans themselves would rate no higher than dogs."