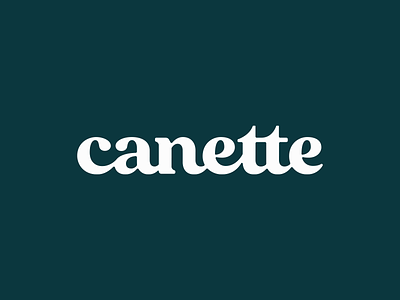 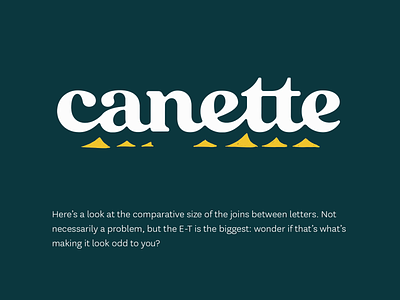 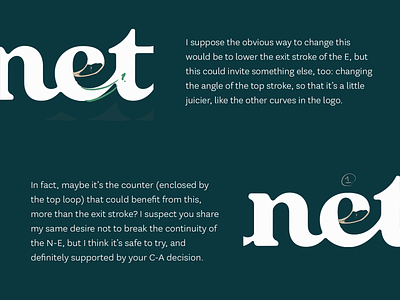 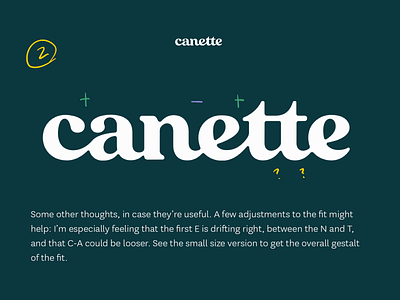 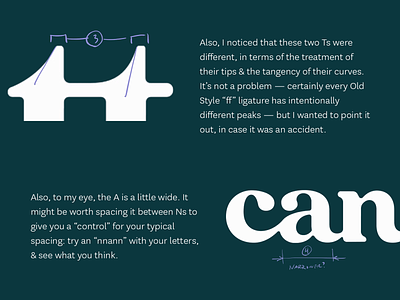 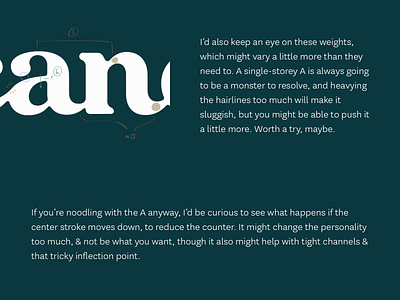 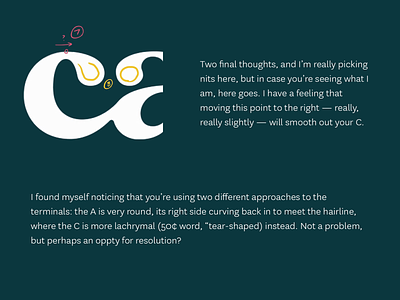 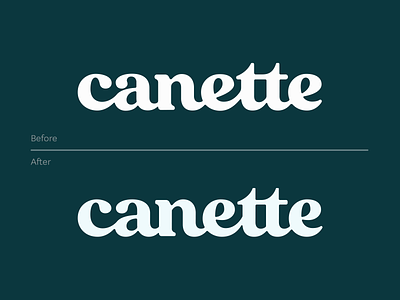 Hoefler&Co was kind enough to provide a second eye on the work I was doing for Canette, a small sewing business based in France. — Since this could be very helpful to put to your own use I have attached all the feedback in the slides, Twitter could be a little messy. All quotes in the slides are by Jonathan.

My main struggle block was the “e - t” connection. Because the curve of the connection is out of place in comparison with the other characters it felt quite off. Hoefler&Co helped me out with this and also had some other valid points.

1. I suppose the obvious way to change this would be to lower the exit stroke of the E, but this could invite something else, too: changing the angle of the top stroke, so that it’s a little juicier, like the other curves in the logo. In fact, maybe it’s the counter (enclosed by the top loop) that could benefit from this, more than the exit stroke? I suspect you share my same desire not to break the continuity of the N-E, but I think it’s safe to try, and definitely supported by your C-A decision. — Since the exit stroke is heavily based on the other characters their connection/exit strokes I want to keep the consistency. On the other hand changing the counter joint is something really clever, next to almost solving the exit stroke is adds a lot of character to the type.

2. Some other thoughts, in case they’re useful. A few adjustments to the fit might help: I’m especially feeling that the first E is drifting right, between the N and T, and that C-A could be looser. See the small size version to get the overall gestalt of the fit. — Kerning between all characters is adjusted and additional also the double t kerning is slightly tighter.

3. I noticed that these two Ts were different, in terms of the treatment of their tips & the tangency of their curves. It’s not a problem — certainly every Old Style “ff” ligature has intentionally different peaks — but I wanted to point it out, in case it was an accident. — This was intentionally done but since we are tighten up everything a bit this would be better of fixed.

4. to my eye, the A is a little wide. It might be worth spacing it between Ns to give you a “control” for your typical spacing: try an “nnann” with your letters, & see what you think. — Using “nnnann” really helped making a slight adjustment to the bowl moving it a tiny bit to the stem.

5. I’d also keep an eye on these weights, which might vary a little more than they need to. A single-storey A is always going to be a monster to resolve, and heavying the hairlines too much will make it sluggish, but you might be able to push it a little more. Worth a try, maybe. — Weight is increased to match the weights of the shoulder and spur of the “n”.

6. If you’re noodling with the A anyway, I’d be curious to see what happens if the center stroke moves down, to reduce the counter. It might change the personality too much, & not be what you want, though it also might help with tight channels & that tricky inflection point. — Top of the bowl is moved down to give the terminal more breathing room.

7. I’m really picking nits here, but in case you’re seeing what I am, here goes. I have a feeling that moving this point to the right — really, really slightly — will smooth out your C. — Anchor point between stress and terminal is moved slightly to the right.

8. I found myself noticing that you’re using two different approaches to the terminals: the A is very round, its right side curving back in to meet the hairline, where the C is more lachrymal (50¢ word, “tear-shaped) instead. Not a problem, but perhaps an oppty for resolution? — Terminals are now matched using a mirrored “c” to define the same terminal.